Steve Rogerson asks if Matter really will be the catalyst for a new era of smart-home devices.

I am one of those people who is still surprised when technology works first time. I guess that is partly due to growing up before personal computers and mobile phones and then experiencing that often painful transition to being connected.

I recall having nightmares just about getting a computer to recognise my printer and having to download various drivers to give it a chance, and still getting that annoying message that it cannot find the printer. I shouted out once – to the amusement of others in the office – that is over there and I can see it, so why can’t you? My language was a little more explicit than that.

So, those days are behind us. Right? Well, not really as they have started to rear their head again with the growth in smart home technology, which has become a very diverse market as companies large and small over the past five to ten years rushed to jump on the bandwagon by adding connectivity to just about any home device. With that came the old problem of interoperability; in many cases these things just would not work together or you needed a degree in communications technology to figure out how to do it.

This was damaging the market, and so a couple of years ago a number of players put their heads together to find a way to make all their devices interoperate. The result was Matter, a new smart-home standard announced last year and which was one of the main talking points at the recent CES in Las Vegas.

This is not bad for an open standard not yet published; that is expected to happen in May or June this year. However, all those involved have early access to the details so expect a flurry of product announcements to coincide with the official launch.

The goal is simple. You buy a smart home device from any manufacturer, take it home, turn it on and, after a small amount of configuration, it becomes part of your existing smart home network. Will it really be that easy? I caught up last week with Steve Hanna, a distinguished engineer at German chip company Infineon and a major fan of the standard, to ask him that very question.

“IoT in the smart home has some serious challenges today,” he said. “It is complicated and confusing. It should not be like that. Manufacturers have been working on how to simplify the smart home, but there is a limit to what one manufacturer can do on its own.”

These problems are not unlike the early days of wifi and even email; I remember with email at first you could only send messages to people who were on the same network as you.

One obvious difficulty with Matter is all the smart home devices out there designed and built before Matter was even thought about let alone became a standard. But Hanna believes many of these can be updated; Matter compatibility will probably be in smartphone upgrades and similar for other devices. For those that can’t, the answer could be a bridge that will connect with existing devices and with other Matter products. This bridge need not be a new device but, say, an existing smart TV or phone.

“Older tech can’t be forever updated, but they can be supported through a gateway or bridge,” said Hanna. “My hope is that every device will be able to connect. Since Matter can work over existing products such as wifi, Bluetooth or Thread, if a device already supports these it can act as a bridge.”

Matter devices will also need some setting up; it won’t be a matter of turning them on and they are connected, but it will be close. That is good for security reasons, plus you don’t want it accidentally connecting to your neighbour’s network. Hanna thinks this could be as easy as scanning a QR code with your smartphone.

With a number of big names already committed to Matter, Hanna is confident it will reach a critical mass fairly rapidly, maybe by the end of this year, and within a few years you won’t be able to or want to buy anything that isn’t Matter compatible.

Not that everything will run completely smoothly.

“There are always teething problems,” said Hanna. “I am sure there will be some with Matter, but they will be fixed. We don’t have device profiles for every kind of device. Coffee makers, for example, are not in the list yet.”

That is probably for the best. When you get your first Matter device, make the coffee first and then sit down and work it all out. Hopefully, it will be simple, but just in case… 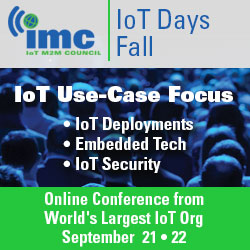